Michael Hood Chose to Embrace a Construction Career, and It’s Paid Off in Spades

Back in late 2014 and early 2015, Michael Hood found himself caught between two opposing forces: The familiarity – and danger – of street life, and the potential of a new career in construction.

Construction Ready was new at the time, with training initially offered at the Westside Works location beginning in the summer of 2014. Living in Westside Atlanta and “hanging with the wrong people,” Michael and a cousin learned about Construction Ready from some fellow community residents who had graduated from it.

“They said, ‘They train you and give you credentials to try to change your life,'” Michael recalls.

He was interested, but he still wasn’t 100 percent sold.

“He said, ‘No, you’re not going back to those streets. I’m going to be the extra push you need. You’re going to go to that school.’ He kept pushing and pushing me, and I stayed with it.”

More than five years later, Michael is still with the same commercial concrete company, Skyline Forming, that hired him when he graduated. Now a certified rigger, he has experience on high-profile projects such as Mercedes-Benz Stadium and a high-rise dormitory for Georgia State University students.

“I’ve been there so long, we look at each other like family,” Michael says. “It’s like when I was in Construction Ready, we considered ourselves family. Sometimes, we’re around each other more than we’re around our own families, six or seven days a week, ten to twelve hours a day.”

Michael entered Construction Ready with no prior experience in the industry. The complexity of the Mercedes-Benz project was eye-opening for him, and he still marvels at the finished product.

“When you first start out, you’re looking at the drawings like, ‘Man, this ain’t going to work,”‘ he says with a laugh. “But as we got close to the end, it all came together. And with me just starting out, to see something come out of the ground, from the bottom all the way to the top, it was just amazing. You’re like, ‘Wow, did we really do that?’ My family members will be like, ‘Wow, y’all did that? And you were hanging off the side of that building?'”

Michael continued his skills training by enrolling in the advanced Construction Ready PLUS program. He was well into the 16-week curriculum in early 2020 before COVID-19 put a halt to classes. Still, he understands that every bit of knowledge gained is a plus.

“I have the experience to go along with the [added training and credentials of CR PLUS], so I can set the bar higher for myself,” he says. “It will take me to new heights.”

Michael also discovered another benefit of having a steady career – it’s helped him become a better father, he says. His five children – all teenaged and older – “look at me different. I’m a better role model. It’s helped me take care of my kids better. I don’t have to look over my shoulder anymore, I don’t have to be running from anybody or hiding from anybody. It’s just amazing. I can tell people my story and they will actually listen, because it’s positive.” 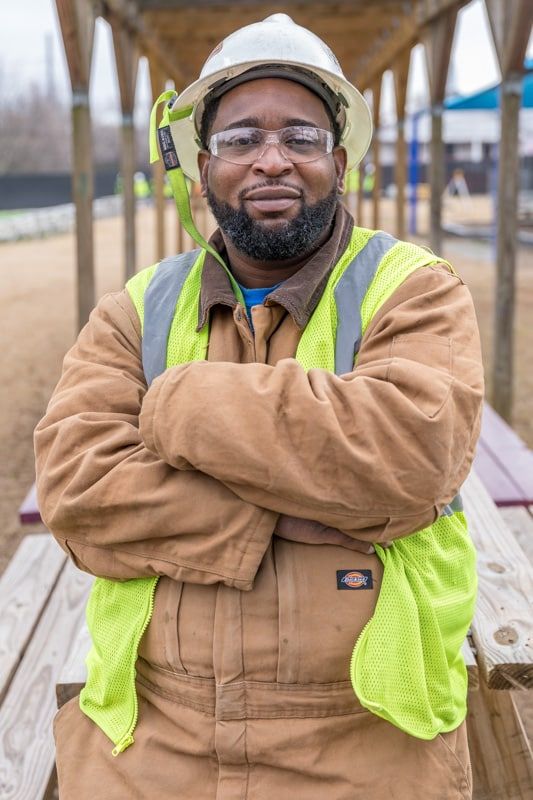