Marshanda Ferrell Has Found Her Niche in the Traffic Control Business

When Marshanda Ferrell received a Construction Ready Graduate of the Year Award – part of the organization’s annual Craft Pro Champion Awards program – in July 2021, she took the opportunity to let the audience know her company was hiring.

As the admin and hiring manager for Doraville-based ABC Traffic Solutions, Marshanda recognized a networking opportunity when she saw it. She’s come a long way since graduating from Construction Ready training in 2017 and joining RoadSafe Traffic Systems in Conyers as a flagger. She eventually took on an administrative role there, then followed her boss, Allan Minnig, after he launched ABC with a business partner two years later.

Now Marshanda is always on the lookout for new hires, including the Construction Ready graduates she regularly recruits as they complete the same training that helped turn her life and career around.

What was your life like before you went through Construction Ready?
My life was up in the air. I didn’t know which way to go. … I was going from this temp job to that temp job to another temp job, just trying to figure something out. Going to school was [out of] the question at the time.

How did Construction Ready help you?
The program helped me a lot by showing me what it takes to keep a job. The fundamentals of having that job, the basics, giving me the [credentials] that I needed to obtain a job … the discipline, it taught me responsibility. It was wonderful.

How did you end up in your current position with ABC Traffic Solutions?
When Allan decided to start his own company, he wanted to take me with him then, but I was six months pregnant. I wanted to keep doing office work, but he had to get the business going before there would be enough office work for me to do. So he said, ‘Just stay here, have your baby, then come to work for us. After I had my baby, I stayed with RoadSafe probably another six months, then I went to ABC.

What do you enjoy about your work at ABC?
I enjoy helping the company grow and move forward. I already knew how to run the front office, I knew the traffic control business, so I just jumped right in when I started there. I like ABC because it gives me an opportunity to be creative in my own way.

How does it feel to be named a Construction Ready Graduate of the Year?
It is amazing. I was very surprised at the email that said I was being presented with this award. I was like, ‘Really, me?’ I like going back and getting new hires [from Construction Ready], so that was the accomplishment for me, and this is just icing on the cake. But I’m really happy. I’m surprised I didn’t cry up there. 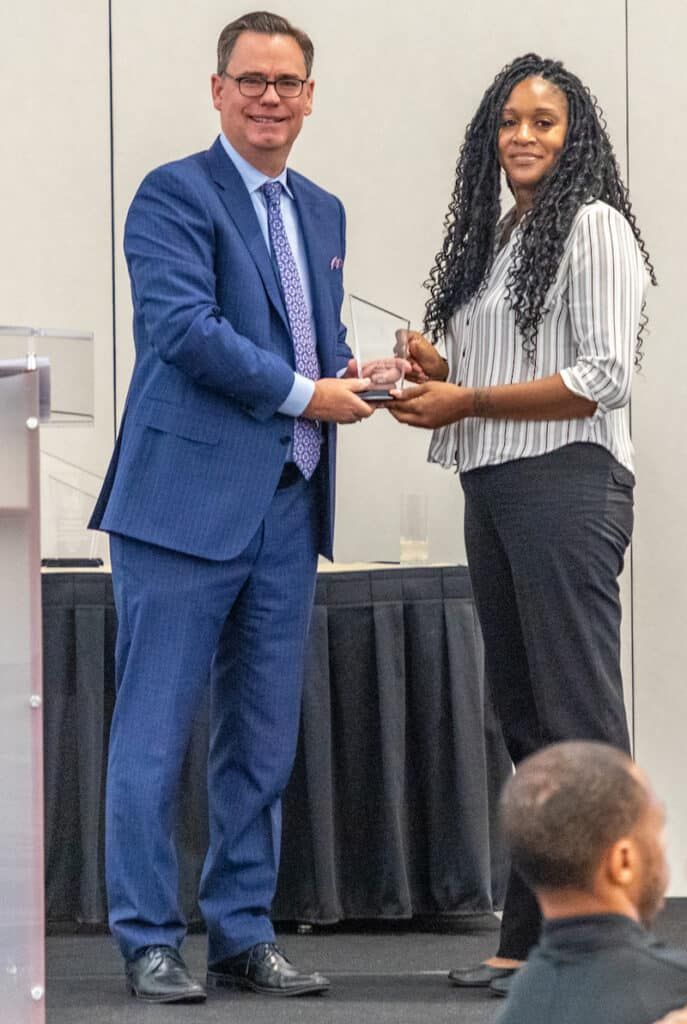